This Is the Good Stuff Vol. 8 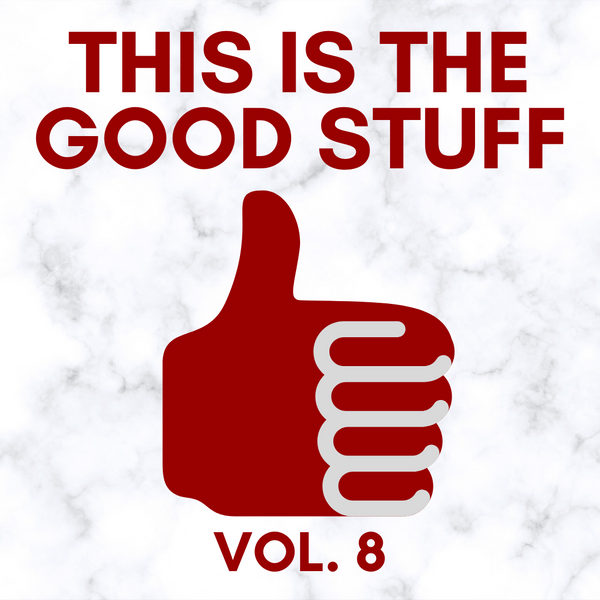 Annie and I both had big work-related stuff going on. The world continued its newly preferred state of near-constant agitation. We had a houseguest – who was lovely and amazing. But still, having even the most welcome guest in our little home is a disruption to normalcy. Kobe Bryant died. Jesus. Kobe Fucking Bryant died. He was two years younger than me. Damn. And Kobe Bryant's poor, sweet daughter died. And those other young people and parents died. Godammit. Stuff like that happens and it's difficult to deal with.

We watched the 2020 Grammys on Sunday night with our guest. I tweeted my thoughts the following day:

"The Grammys" is impossible to summarize. Is it a shitshow? Yes! Is it a showcase for incandescent new talent? For sure! Is it rigged? Probably! Does it introduce regular folks to music they wouldn’t have heard otherwise? Definitely! Is it a racist/sexist institution? Absolutely!

But I think we all had fun watching. It was kinda cathartic, actually, since it served as a quasi-public memorial service for the people who had passed earlier in the day, the most famous of whom performed professionally for his entire career in the very building where the ceremony was taking place. So that was nice. Alicia Keys, who hosted, is cool. It's always fun to see all those people – the top 1% of the music industry, really – in the same room together. But yeah, I hope no one watching thinks that the Grammys is some kind of accurate representation of The Music Industry.

Nevertheless, There Is Good Stuff

Anyway, I'm not here to summarize my feelings about my experiences over the past week; I'm here to tell you about what's good in my world and possibly the world in general, though your mileage may vary. I'm sure it will, actually.

As you may know, I've been keeping Facebook at arm's length these days. I have numerous reasons for doing so, but I don't wanna get into them here. What I want to get into is how much I love Twitter.

I joined Twitter back in the spring of 2009. I am user #29,272,633. Now there are, like, 300 million active users, which doesn't take into account all the people who have signed up and said, "fuck it," over the years. So I've been on the platform for a while. Actually, I entered the Twitter world to stay up to date on the show LOST back in the day. I'm still following many of the LOST people from back then. Some of them are still following me. It's fun.

Anyway, yeah, I know Twitter is a garbage fire in many ways, just like Facebook. I happen to find it much more manageable, though. I use apps like Buffer, TweetDeck and Tweetbot to bend the platform to my preferences. I also make liberal use of Twitter lists, which is something I recommend highly if you wanna keep your shit together, too.

In recent years, my Twitter usage has receded to a slow drip. But now that I've got some extra social-media energy to burn, I find myself experiencing a reawakening of my Twitter passion. I've been having fun sharing dumb thoughts and ideas. I've been enjoying the streams of information from my expertly curated lists. People are connecting with me and I am connecting with them in ways that seem more authentic – and less "managed" – than the connections I have been making on other platforms. It's just been very enjoyable for me.

I am making Twitter the centerpiece of my social-media world. At least for now that's the plan. If you wanna follow me over there, I'm @MHKollock.

One of my goals this year is to reach 1,000 followers on Twitter. As of right now, I have 605. The more people I can get to follow me over there, the more likely it is that I'll get people to visit my website, read my blog, listen to the podcast (which is on its way, I promise!), listen to my music (which is also on its way, I promise!), join my Patreon, sign up for my email list and all that stuff. So I've been trying to figure out the best ways to grow my follower count in at least a somewhat-organic manner.

Tweepi is a tool I used to use for one of my clients. I thought I might try out the free version for myself. What it does is suggest accounts to follow based on their likelihood to follow you back. It also makes it easy to unfollow the people who fail to follow back. It's kind of gaming the system, but it does not go against Twitter's user agreement or anything. In fact, I remember Tweepi being more robust a few years ago, but Twitter must have cracked down on some of the features.

Anyhow, I've been using Tweepi to find people to follow, many of whom have been just wonderful to see in my feed. A lot of them have followed me back. It's been cool. I've also been using the tool to unfollow people so I keep my ratio where it needs to be to keep this thing up.

Gosh, I just realized this is probably boring as fuck for you. Well, I've got some bad news...

I have one more boring-ass topic to present in today's post. But secretly, it's the most energizing and exciting topic. For real.

These days, I can't imagine going back to having those goddamned notifications turned on. Goddamn. Now I check my emails when I am prepared to check my emails. And everything is just fine. I'm just a lot less anxious and all that. Goddamn.

Okay. That's it for the boring-ass topics. Did you see how I used some mild profanity there to jazz things up? I hope you appreciated that.

Lately, I've been thinking a lot about the idea that nature rewards courage. That idea comes from a quote from the legendary 1990s psychonaut Terence McKenna:

Nature loves courage. You make the commitment and nature will respond to that commitment by removing impossible obstacles. Dream the impossible dream and the world will not grind you under, it will lift you up. This is the trick. This is what all these teachers and philosophers who really counted, who really touched the alchemical gold, this is what they understood. This is the shamanic dance in the waterfall. This is how magic is done. By hurling yourself into the abyss and discovering it's a feather bed.

I haven't been too courageous lately, but I've been dipping my toes in slightly uncomfortable waters. Taking my walks through the woods down new, unfamiliar paths. Making slight tweaks to the standard ways of doing things. Trusting new processes that seem more aligned with my true being and values. I've been exploring, really. Continuing to figure myself out so I can refine my processes and procedures. This exploration is uncalled for. But it seems right. And it's working out pretty well. I'm making progress. Good things are happening.

Now I want to apply a little more pressure to the gas pedal. In what ways can I be more courageous and transform my explorations of self into actions that forge the person I am becoming? What risks represent the stepping stones to my story's next chapters? I will keep you posted.

Speaking of exploration, I've been listening to a lot of music by one of the most exploratory musical groups in modern history – the Grateful Dead. I give that segue a C+.

Anyway, there's a new podcast that features two pretty accomplished music journalists discussing each release in the DIck's Picks series of live albums by the Grateful Dead. There are 36 of those albums. Presumably, there will be 36 episodes of this podcast, which is called 36 From the Vault.

The hosts, Rob Mitchum and Steven Hyden are knowledgable without being dicks (ha!) or know-it-alls, and they're pretty engaging to listen to. Hyden actually grew up in Wisconsin, just like me, and we are of a similar age. I have enjoyed his writing for quite a while now. Probably since the big Whatever Happened to Alternative Nation piece he did about 10 years ago for The AV Club.

So yeah, this is a cool podcast if you're into the Grateful Dead or even just curious. They've released two episodes thus far. And all the Dick's Picks albums are available to stream on Spotify:

This Article by the Aforementioned Steven Hyden

Sometimes I think about the music that was popular when I was a youngster and how so much of it seemed engineered to piss parents off. It seems like modern popular music no longer makes room for the stuff that makes Mom and Dad lose their shit. Thankfully, ol' Steve Hyden wrote an article exploring this phenomenon so I don't have to. It's great and you ought to read it. Here's a quote:

Okay. Now it's time for a plug. I've been making a Spotify playlist every Wednesday. It's been a lot of fun. I feel like I've made some inspired choices. People are digging the playlists so far. Have you checked out my Discover Weakly playlists yet? Here's the most recent one. Enjoy!

Oh yeah, if you are reading this in the future, it's possible – probable, even – that I have changed the name of the playlist from DIscover Weakly, which is really just not very original, to something a lot cooler. Hopefully it's obvious to you what I'm talking about here, future person who is probably wearing some kind of shiny, metallic garment and has a weird, angular hairstyle.

I dropped my new electric guitar on the kitchen floor yesterday. I had the thing slung around my back as I was walking around. It doesn't matter why. Stop asking. That particular positioning made the strap's connection to the end button on the body vulnerable. It slipped off of me and onto the floor. Now it's a little fucked up. Nothing major, I don't think, beyond some cosmetic damage to the body. I think the tremolo may have gotten, like, unseated or something. I don't know. I'm not a guitar expert; I just play the thing. But yeah, I'm going to have to get it looked at.

So I recommend strap locks. Something to ensure that the strap cannot slip off its buttons. I have them on my acoustic guitar, which I have never dropped or damaged. I'm going to get them for my electric now. And I'm never going to fuck with a guitar without them in the future.

Wow. I had some good stuff to write about this week. That's a good sign. I like good signs.

What about you? What's good in your life? How was your week? Let me know, okay?

See you next time!