TMKS #16 – The Return of The Matt Kollock Show! 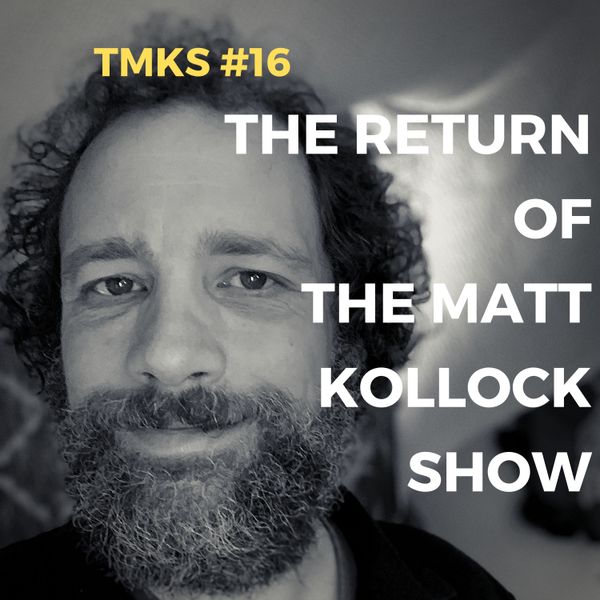 Guys! It's been, like, six months since I've posted a new episode of The Matt Kollock Show, and I'm happy to say that I've found my podcasting groove again. Or is it that I'm just avoiding the mixing and mastering of microorganism, my upcoming album? Probably a little bit of both.

All The Main Stuff And The New Stuff

Speaking of microorganism, I spend some time in this episode talking about the progress I've made on the album and when you can expect to listen to it. I also talk about a lot of other stuff. New stuff that's happened in my life and in the world.

But I set the scene with the Main Stuff, which, in my mind, is COVID, shitty (but also sometimes somewhat hopeful) U.S. politics/culture stuff and the fact that BLACK LIVES MATTER. This episode is being released a day before the inauguration of Joe Biden to the United States Presidency and a day after Martin Luther King Day. I have some things to say about all that.

Yeah, there's a lot of new and fun stuff to mention. I catch you up and I shake off the rust, which might sound better than you think! Why? I have a new microphone and a slightly different podcasting setup. You may notice an upgrade in sound quality since episode 15. Nice! I talk about all that kind of stuff in today's episode.

What's It All About Going Forward?

You really should. It's a landmark. It's probably the best thing I've ever written. I've already heard from a lot of you about it. I'm grateful for the feedback, which has been mostly extremely positive. There have been some negative reactions, too. I want to hear all of them.

The next episode of The Matt Kollock Show is going to be a feedback-focused episode, in which I discuss the comments I have received with regard to "Dear Little Matt." I want to share what people have taken the time to reach out and say. I'd also like to talk more about the personal journey I have been on since publishing the blog post.

Moving beyond the next episode, the podcast will feature, mercifully, the voices of others.

I am going to interview people not only about the subject of childhood trauma, but about music, psychedelics and groovy shit. I talk about that in today's episode, too.

Wanna reach out? Email me at matt@mattkollock.com.

Right now, in fact. Big things are happening. People are coming together. Timelines are being jumped. Rad guitar solos are being played.

Also, I am going through a process of healing. And I am here to write, talk and play music about it. FOR THE WHOLE WORLD.

So that's what's going to be happening in this space going forward. I hope you will join me. If you cannot join me, I wish you the best. I love you. This ride never stops, so reach out when you're ready to take it somewhere different. Stuff like that.

I could use some!

You can help me by following me wherever you get your music. That way you'll be notified when new music is released.

You can also subscribe to me on Patreon! It's a real trip over there, but it's a small one. Won't you help me turn my little Patreon trip into an epic journey? Sweet!